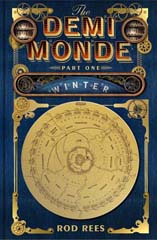 World building is the term applied to the exercise undertaken by all Science Fiction and Fantasy writers involving the creation of a believable and coherent backdrop – be it an alien world, a dystopian future or an alternative reality – to dress the stage upon which the writer’s fictional thespians can perform. And its purpose is just the same as scenery; to allow the audience to more easily suspend disbelief and willingly to enter the counterfeit world of the writer’s imagination, a world (hopefully) made so speciously plausible, so consistent, so logical, and so precise that the reader is persuaded to think…well, why not."

Renegade Writers is a writers' group that meets every Wednesday (7.00pm-9.30pm). We are open to all writers in the area and beyond. Come along and enjoy the company of fellow writers. Entry is free. To contact Renegade Writers, send an email to renewriters@gmail.com or visit our new website -- see the last post on this page.