The Demi-Monde by Rod Rees 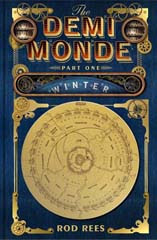 Look out for The Demi-Monde by Rod Rees (member of Renegade Writers' Group): "The Demi-Monde is the most advance computer simulation ever devised. Thirty million people ruled by history's cruelest tryants, locked in eternal civil war. The intention: to create the closest thing to hell, preparing soldiers for the nightmarish reality of war. But something has gone badly wrong inside the Demi-Monde...

Heydrich. Beria. Torquemada. Robespierre. History's most notorious mass-murderers -- or at least simulacrums of these monsters -- plot to escape their virtual world; their sights are set on the real world."

Renegade Writers is a writers' group that meets every Wednesday (7.00pm-9.30pm). We are open to all writers in the area and beyond. Come along and enjoy the company of fellow writers. Entry is free. To contact Renegade Writers, send an email to renewriters@gmail.com or visit our new website -- see the last post on this page.